The 2012 Hawkwatch season at Cape May is officially now under way - and a good time has already been had by all! September 1st sees the official start of our Hawkwatch Count so do look out for the daily totals postings on our Seasonal Research blog which you can reach via the link on the menu bar above. Saturday saw the traditional start to the season with many old friends coming to see the new season in and to catch up on stories and on what we have all been up to since last we met. The Cape May Hawkwatch Platform is as much about the people that visit as it is about the serious task of counting all those raptors that fly by; that's why we make sure we have a very capable team of Interpretive Naturalists on hand for the next two months whom you can talk to and find out just what is happening from day to day. Here's this year's crew - we'll post a short biography about each person shortly: 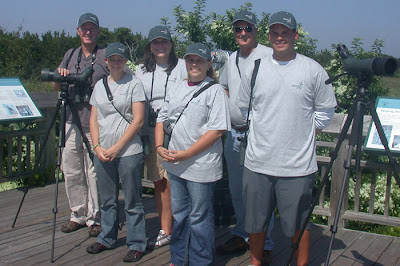 With winds drifting to north-west for a while in the afternoon, a reasonable showing of raptors was achieved with a day total of 102 birds counted - not a bad start so early in the season. With many pairs of eyes present throughout the day, a good range of other birds was seen too, including fly-over Buff-breasted, Stilt and Pectoral Sandpipers, all the expected swallows for early September, Green Heron, Gull-billed and Caspian Terns, several Brown Pelicans, a bedraggled adult Yellow-rumped Warbler and much, much more. So far today (September 2nd) two Lark Sparrows and a fly-over Mississippi Kite have been reported from Cox Hall Creek WMA and Buff-breasted Sandpipers continue to zip through our area - try South Cape May Beach or the dredging impoundment at Higbee Dike if you want to find one.
Posted by Mike Crewe at 10:47 AM