I'm not a keen one for predicting flights at Cape May - there are just too many variables for us to be able to do that, but you have to admit, I did suggest you should be at Higbee Beach today! After Cameron almost died of boredom yesterday with just 13 birds at the dike flight, today was a very different story. Keeping up with the amazing warbler flight was pretty tough going, but Cameron's guestimate of some 2500-3000 Blackpoll Warblers, in a flight of over 4400 warblers, gives a good idea of just what was in store for today's lucky birdwatchers at the point. Given that all the birds counted by Cameron headed northward off the island, the large number of warblers left around the streets of Cape May Point must surely have been additional to the dike flight birds and adding another thousand or two to the Higbee total would perhaps give a better indication of what was here to be enjoyed.

My own day started with a mix of time spent on the dike and in the Higbee fields, but the relatively strong north-west wind was blowing birds around rather and it was difficult to pin most birds down. I heard of a very showy Wilson's Warbler in the first field and later of a couple of Connecticut Warblers, but started my own tally with good views of Swainson's Thrush feeding on Virginia-creeper berries. As well as a large flight of Blackpoll Warblers and Northern Parulas, there were good numbers of Scarlet Tanagers and Rose-breasted Grosbeaks, then it was time to go and see what was happening elsewhere. When winds are stronger, birds can often get blown further across the peninsula, and the Higbee flight didn't seem to be coming along the usual flightline, but from a little further east. I headed out, but not before stopping to photograph the local Wild Turkeys crossing New England Road. Richard Crossley had reported a good number of birds on Seagrove Avenue and I was soon in the thick of a remarkable warbler show which surpassed the Higbee experience as the birds were simply hanging around and feeding in the trees - oh and on lawns, window frames and garage roofs as well! Before long, a UK-style birding crowd had gathered and the list of warblers soon grew - Common Yellowthroat, American Redstart, Northern Waterthrush, Black-and-white, Blackburnian, Pine, Palm, Prairie, Wilson's, Chestnut-sided, Magnolia, Black-throated Blue, Black-throated Green, Cape May, Tennessee and Yellow Warblers and Northern Parula were all on my list by the time I left Seagrove and many smiling faces were still enjoying the show...

Every flight is slightly different so you have to run the circuit of all the regular locations to check just where the best bird gatherings are taking place. I heard later that the state park cedar stands were rather quiet, but the Northwood Center front yard seemed to be pretty busy, so I headed out around Lake Lily to see what else was out there for folks to enjoy. My route eventually found me at Bill and Edie Schul's famous 'Magic Tree' on the corner of Cambridge and Coral Avenues. This tree is a large Siberian Elm, a species with deeply fissured bark, and it is in these fissures that certain species of aphid hole up in great numbers to hibernate. Today, this tree was magic indeed as warblers hopped about all over it - at one point, seven Blackpoll, one Black-and-white and two Pine Warblers, and two Red-breasted Nuthatches were busy feeding on a single branch! Tennessee, Nashville and Cape May Warblers were here too, as well as Ruby-throated Hummingbird and one of several Eastern Wood Pewees seen today. Other Siberian Elms around the point were excelling themselves in a similar way, including those that hang right across the road at the north end of East Lake Drive.

Tearing eyes away from the trees was not easy, but it was necessary periodically, so as to enjoy the raptor flight that was also taking place overhead. Not a huge or dramatic flight, but a steady stream of nice birds - at one point, a Bald Eagle and a Peregrine were sharing air space, on another occasion, a Northern Harrier and a Broad-winged Hawk did a left and right on me. Pete Dunne's Falcon Fest workshop certainly seemed to be having a great time when I stopped by the Hawkwatch Platform later, with American Kestrels and Merlins sharing the airspace and tucking into dragonfly lunches. Perhaps the most interesting movement today involved Belted Kingfishers, with 25 or more logged passing the Hawkwatch Platform today. An awesome today and - well, fingers crossed, but tomorrow is looking promising too - see you in the field!!! 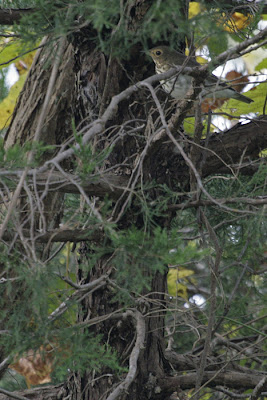 A great start to the day - a Swainson's Thrush peeps out from the depths of a red cedar at Higbee Beach. Both Swainson's Thrushes and Veeries were around first thing this morning at several sites [photo by Mike Crewe]. 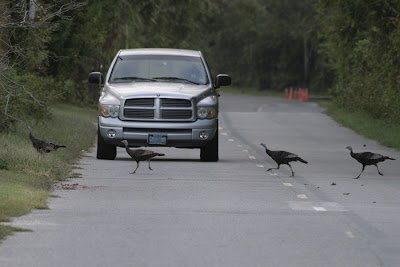 One at a time now! A small Wild Turkey population is developing along New England Road - good news for attempts to keep ticks at bay as these guys love to eat them [photo by Mike Crewe]. 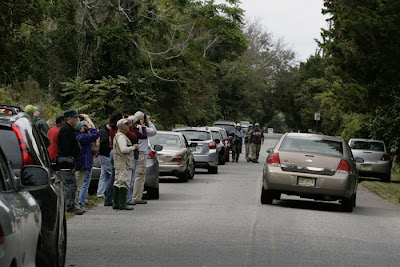 Seagrove Avenue this morning - the only place to be for a real warbler treat [photo by Mike Crewe]. 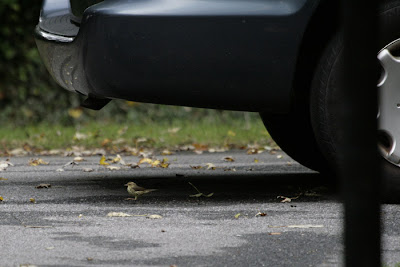 It's not just turkeys that need to cross the road! A Northern Waterthrush struts out from under a parked car - just one of three that were lurking there at one point... [photo by Mike Crewe]. 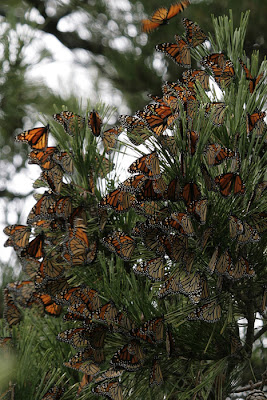 And for fans of four wings rather than two, the Monarch roost that gathered on the dune at the intersection of Lincoln and Cape Avenues drew an even bigger crowd than the warbler shows elsewhere. If winds are north rather than north-west at first light tomorrow, there could be a dramatic lift of these butterflies as they test the air currents over the Delaware Bay before continuing their southward migration [photo by Mike Crewe.]