Jays, flickers on the move, plus other things...

Blue Jays and Northern Flickers have been very noticeable over the past 24 hours or so, with busy groups of these common - but still great to look at - birds passing through our airspace. This morning at Higbee Beach, 30 flickers were in the air at one time, no doubt stirred up by the male Cooper's Hawk that was patrolling the field edges. Yesterday morning, it was the turn of Blue Jays, with Tom Reed counting over 400 passing the Hawkwatch Platform, and several of the local birders were counting the same birds as they spun around Cape May Point and competed with a good movement of Monarchs for our attention. Busy migration mornings at Cape May are not guaranteed and sometimes they can catch us unawares; Thursday morning was one of those days, as Merlins came in off the bay carrying unfortunate Blackpoll Warblers that were caught out over the water at first light, Parasitic Jaegers harassed the local terns in the rips (at one time, three jaegers were chasing the same tern!) and Monarchs fluttered by in little strings of four or five individuals.

If you are here at Cape May and finding it quiet at the point, there are still plenty of good birds around Stone Harbor/Nummy's Island (Red Knot, Marbled Godwit, Piping Plover, Black-crowned and Yellow-crowned Night Herons, Tricolored Heron) and Cox Hall Creek WMA (Eastern Bluebirds and plenty of warbler opportunities) as well as Horned Larks and American Kestrels at the airport and good chances for American Bittern or Sora at The Meadows in the evenings. Don't forget the great Black Skimmer show at 2nd Avenue jetty too!

The weather continues hard to predict, but, if the weather plays fair, we could have a nice run of birds Saturday morning. North-west winds are predicted from the middle of the night onward, which should bring us some birds - so what's the hitch? Well, to predict local bird movements, you really have to look further afield; remember that the weather at the bird's point of departure and during their onward journey through the night has to be right. Looking at the broader picture, there is a band of rain currently making its way across the country from the south-west. If that passes to the north of us during the night, it will bring the birds down and they won't make it to Cape May - at least not on Saturday. Still, let's be optimistic - birds will be moving tonight, there is no doubt of that so let's put a little voodoo on that weather pattern and keep it west of us, where it belongs (sorry Pennsylvania!!). See you at Higbee's tomorrow! 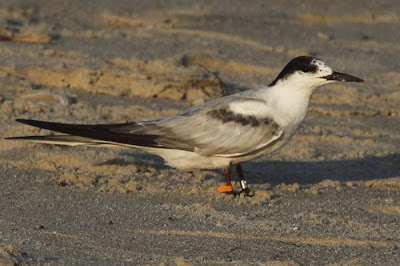 It always pays to keep an eye out for banded birds, especially those wearing color marks which are easier to see in the field. This Common term was photographed at Cape May Point by Linda Widdop and appears to be part of a banding scheme taking place in Argentina - you never know where your birds are going!! If you do see a banded or color-marked bird, please do take time to report it, as all such schemes rely on the reporting of birds so that information can be gained on their movements. To report a bird, go to http://www.pwrc.usgs.gov/bbl/ and follow the instructions. 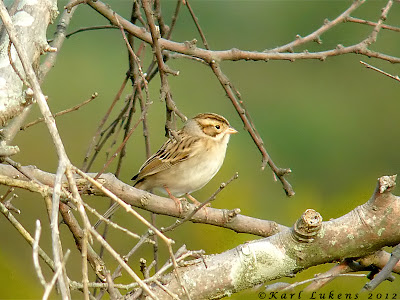 Ahhh, sparrows! They are really great little birds, but oh so infuriating! This Clay-colored Sparrow has delighted visitors for ten days or so at the state park brush pile just west of the plover ponds. It's really worth putting in the time to get to know sparrows better and you will find them not as tough as you might at first think. Our Sparrows workshop is a wonderful way to get to grips with these smart little birds - find out details from our Program Registrar on 609-861-0700 [photo by Karl Lukens]. 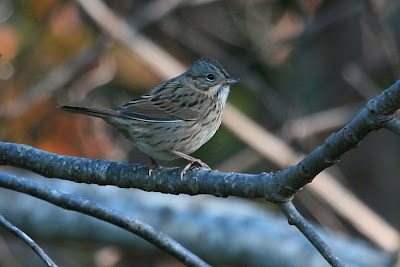 Knowledge pays off! Lincoln's Sparrow is an elusive bird at Cape May Point but is there for the finding - as we discovered on our Wednesday morning walk, right in the same brush pile as the Clay-colored Sparrow! [Photo by Mike Crewe] 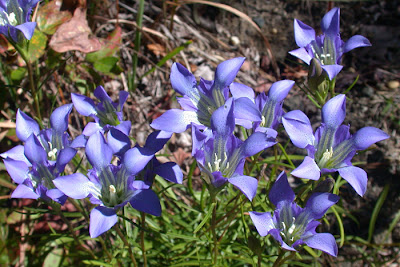 Finally, don't forget Cape May's 'Top End' during late September as it still has many treats awaiting your discovery. This wonderful stand of Pine-barren Gentian was a real highlight for me last Monday morning on a late-season Belleplain visit [photo by Mike Crewe]. 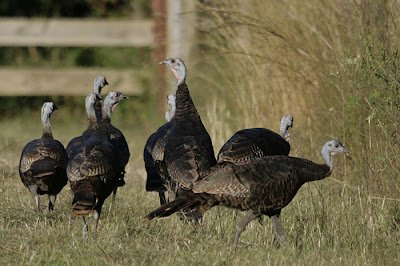 If you are visiting Cape May from abroad, you might like to try finding a few Wild Turkeys while you are here. These birds are on the increase in our area and an early morning drive in the north of the county will often provide you with nice views of these chunky birds. This group is a part of some 20 birds that were near Petersburg last Monday [photo by Mike Crewe]. 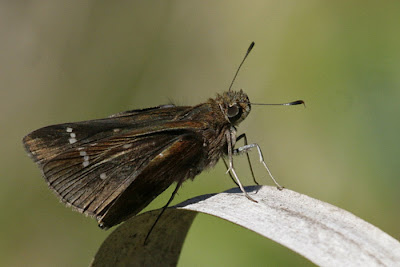 Butterflies continue to be in the news as southerly airflows push more and more exciting species into our area. This Clouded Skipper was found by Chris Tonkinson on the CMBO butterfly walk at the state park last Sunday. This species, as well as Ocola Skipper and the more imposing Brazilian Skipper, are all being reported around the county right now [photo by Mike Crewe].
Posted by Mike Crewe at 1:03 PM