Migration update and some recent photos

Migration this past few days has been hard to sum up, as variable and somewhat unpredictable weather keeps us guessing. Night that look ideal for a good movement, while more mediocre conditions have produced some interesting flurries of activity. All I can say is - it's September, get down to Cape May whenever you can! Last Sunday morning and today (Thursday) have so far provided the best small falls of bird movements through Higbee Beach. To keep a daily eye on these, don't forget to visit our Seasonal Research page, where Cameron Rutt is doing an excellent job posting the Morning Flight counts and analyzing data. Tom Reed is also posting sightings from the Hawkwatch Platform there on a daily basis, so there should be plenty for you to read as we keep you updated on all the wonderful bird movements through Cape May.

Yesterday, I had 12 Common Nighthawks flying over my house around 6:15PM while 20 or more were apparently over the state park around the same time, so the remarkable fall for that species continues. One or two other less-than-usual sightings of late included a Hooded Warbler that Richard Crossley reported to me in the third field at Higbee Beach today and that site also had a nice movement of Red-breasted Nuthatches again this morning, as well as Nashville Warbler, Rose-breasted Grosbeak and good numbers of Cedar Waxwings, Red-eyed Vireos, Common Yellowthroats, Indigo Buntings and Northern Parulas. There also seemed to be a first push of Red-bellied Woodpeckers among the more numerous Northern Flickers. One bird I would ask anyone visiting the back bays to keep an eye out for is Reddish Egret. Some visiting friends from the UK reported one from the south side of Avalon Boulevard a few days ago and, as this would be a first record for Cape May County, it would be great if someone could re-find this bird and grab a photograph! There's plenty of places to look - Nummy's Island, Shell Bay Landing, Benny's Landing or any of the boulevards that cross the back bays to the barrier islands. The bird was reported as an adult with full head plumes. 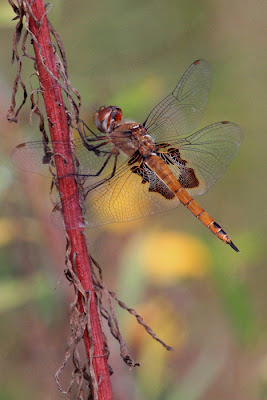 Last week I posted phone pictures of the Red Saddlebags that was at Higbee Beach. Just for the record, here's a much better photo taken by walk participant Dave Romea. I haven't seen this beastie again since then, but do keep an eye out for this Cape May rarity. 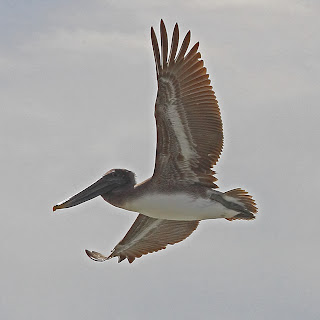 It's been a bumper year for Brown Pelicans around Cape May and small parties may still be seen around Cape May Point or up around Hereford Inlet. This fine portrait was captured by E J Nistico at Longport Island. 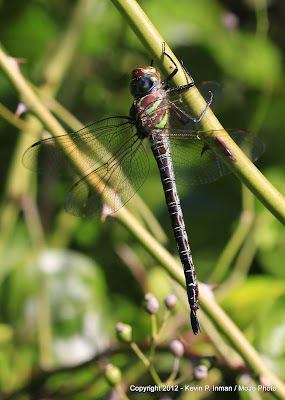 Dragonflies continue to be a major migration feature at Cape May right now. As well as large numbers of various saddlebags and gliders, Swamp Darners (above) are easily seen right now - though you have to be lucky to get one settled and posing for a shot [photo by Kevin Inman]. 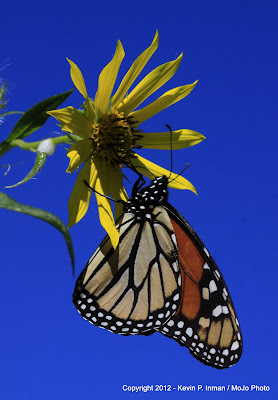 All you keen butterfly watchers will be pleased to know that Monarch migration is now in full swing. Variable weather means that roosts are forming and breaking up quickly and so far we have not had the right conditions to produce an epic flight. However, some 600 Monarchs were on Stites Avenue in Cape May Point last night and there could be good numbers around over this coming weekend. For regular updates, check out the Monarch Monitoring Project blog site [photo by Kevin Inman]. 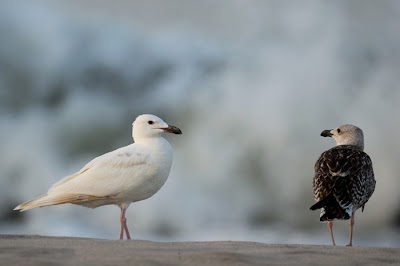 Always be ready for the unexpected in Cape May! I was sent this picture by Jon McRay of a bird that could easily be mistaken for a Glaucous Gull (left), but which Jon correctly surmised is a Great Black-backed Gull. The dark bill and eye mean that technically this is not an albino but what is termed a leucistic individual, with greatly reduced color pigment in its feathers. Compare size and structure with the 'regular' Great Black-back on the right. 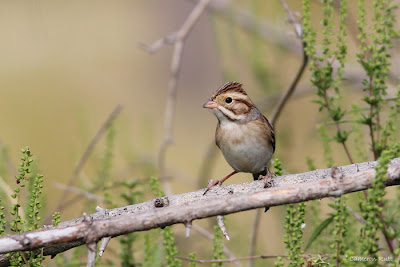 This Clay-colored Sparrow recently spent a few days around the brush pile near the south-east corner of Bunker Pond and showed very well at times. Note the rather pale face, caused by the lack of a dark line between the bill and eye - a feature that nicely identifies it from Chipping Sparrow [photo by Cameron Rutt]. 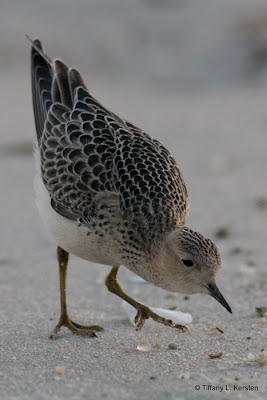 Buff-breasted Sandpipers are so wonderful that they instantly create great photo opportunities. Tiffany Kersten caught this wonderful image on South Cape May Beach recently - and it can only be in Cape May, since there's a Cape May diamond right at its feet! 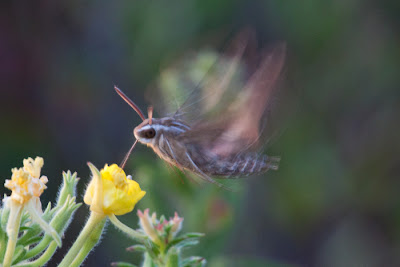 Sometimes you can create wonderfully artistic images simply by having a photo that isn't pin-sharp, but which creates the impression of movement. Low light levels create slower shutter speeds and I really like this image of a White-lined Sphinx sipping from evening-primrose at Stone Harbor [photo by Mike Newlon]. 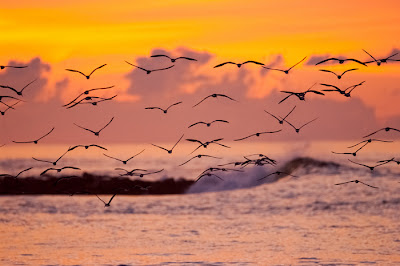 OK, OK, so finishing on a sunset is cheezy!! But isn't a Cape May sunset the very best backdrop for a flock of Black Skimmers?! Check out the beach in front of Second and Beach Avenues for some great photo opportunities in the evening [photo by Jon McRay].