It's been a few days since I last posted, but not because there's nothing to report, it's more because it's been so wonderful out there that finding time to write about it has not been too easy!! Birds are passing through Cape May in good numbers now and pretty much anywhere you go will provide you with wonderful birding experiences. I've received a nice array of photos from others, as well as having enjoyed my own wildlife experiences so, rather than find some long-winded way of trying to pull them all together, here's a shameless celebration of the amazing wildlife show from the past few days: 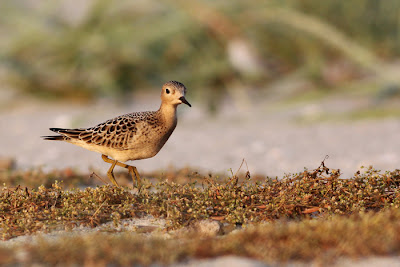 Buff-breasted Sandpipers have more or less run their course with us for this year, but the South Cape May Beach has certainly been the place to see them, as ever. This fine image was taken there recently by Cameron Rutt. 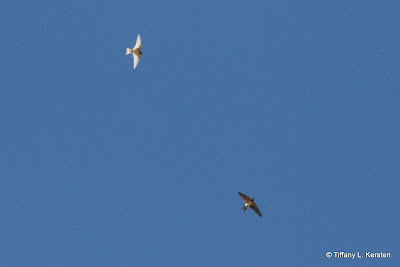 Tiffany Kersten spotted this peculiar swallow (top) flying over the Hawkwatch Platform and closer looks at the photos revealed it to be a leucistic Barn Swallow - there's a 'normal' one below it. Leucism is a term used for any individual which shows partial forms of albinism; in other words, they may be rather washed out in color rather than pure white, or the white may not cover the whole individual. This bird - though distant, seems to show a normal-colored head and some light brownish coloration elsewhere. 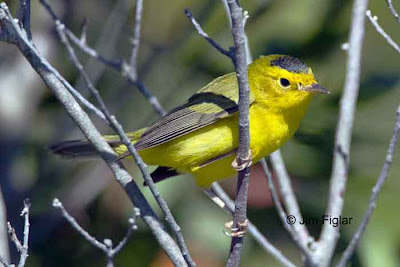 Wilson's Warbler is a regular passage migrant through Cape May in fall, but this year numbers seem to have been higher than average, with one or two birds reported on a daily basis over the past 10 days or so. This photo was sent to me by Jim Figlar. 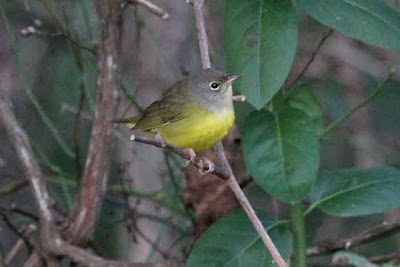 We are now into peak time for the elusive Connecticut Warbler, but there are other skulkers to keep an eye out for too. This Mourning Warbler was photographed by Jarrod Derr on September 9th, continuing a pretty good fall for this species at Cape May this year. Note the extensively gray head, like that of Connecticut Warbler, but note also the yellower underparts and the rather weak eye ring which is broken in front of and behind the eye.


A real surprise find so early in the season (and probably the most easily misidentified raptor at Cape May!) this juvenile Northern Goshawk was reported by Kevin Carlson and Richard Crossley from Higbee Beach on September 10th. There has been higher than usual numbers of these birds moving through northern watchpoints already this season, so maybe this is the year to get this bird well and truly on your Cape May list! 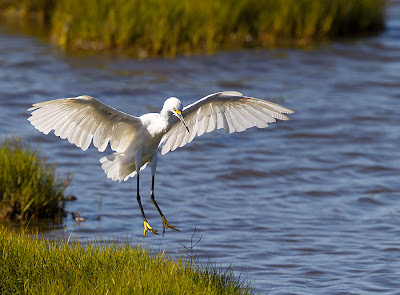 Finally today, one for the photo album! Jane Ellison sent me this great portrait of a Snowy Egret coming in to land at the Wetlands Institute. Sometimes it's nice to just get out there and photograph even the common birds!!
Posted by Mike Crewe at 2:41 PM