Sorting out the saddlebags

The group of dragonflies known as the saddlebags are really apparent around Cape May right now and we're getting many questions at the Northwood Center about them. A number of these dragonfly species are well-known, long-distance migrants and large numbers of them have been appearing at Cape May lately - and will almost certainly continue to be around for a few weeks now. So here's a quick photo guide to identifying the most likely species here: 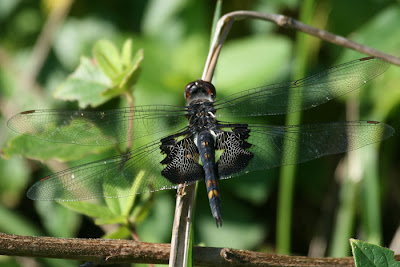 The 'saddlebags' dragonflies are named after the large, colored patches on their wings that bear a passing resemblance to the saddlebags carried on the sides of a horse or a motorbike. The easiest species to identify is the Black Saddlebags, seen here, as it is the only species you will see here that has black rather than red patches on its wings. The body is also extensively black, with yellowish patches toward the end of the abdomen [photo by Mike Crewe]. 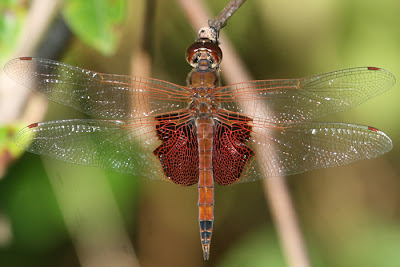 The common and widespread red species around Cape May is Carolina Saddlebags, a regular breeding species with us. You are likely to see this species pretty much anywhere right now. Like most saddlebags species, they hunt for long periods on the wing and, when perching, prefer to sit high up on a tree top, making them often difficult to study closely. To identify this species from above, note the exact shape of the outer edge of the wing patch - the spiked 'tooth' in the middle of this outer edge has an inward notch on the top side of it, but not on the lower side [photo by Mike Crewe]. 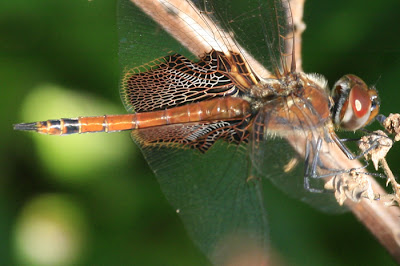 When viewed from the side, note that the black patches on the abdomen of a Carolina Saddlebags - especially the larger one, furthest from the tip - continue well down the side of the abdomen [photo by Mike Crewe]. 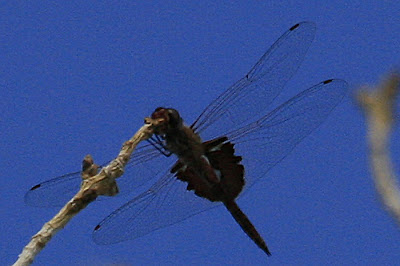 Red Saddlebags is a southern species that is a rare vagrant to Cape May, though it could easily be missed amongst the large numbers of Carolinas, so may be a little more common than records suggest. In this typical view from below, note the shape of the outer edge of the dark wing marking. The spiked 'tooth' in the middle of this outer edge has an inward notch on both the top side and the lower side, making it more obvious than on Carolina Saddlebags. Note also the narrow, pale window toward the front edge of the wing patch which is sometimes useful, but not always noticeable [photo by Mike Crewe]. 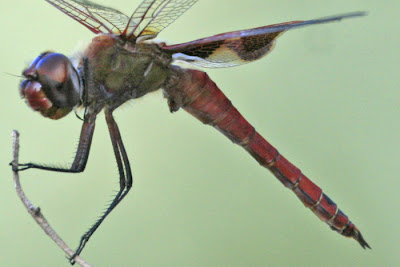 In this side view of a Red Saddlebags, note that the black patches toward the tip of the abdomen do not extend down the sides. Note also the large, triangular, clear window at the base of the wing which extends into the dark wing patch. This feature is also shown by Black Saddlebags but usually not by Carolina Saddlebags. 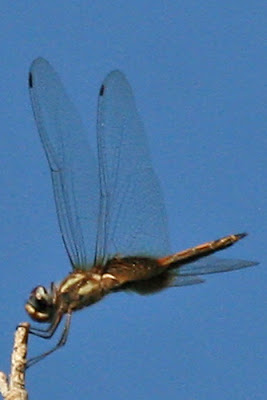 Another vagrant to Cape May (and already reported this year by Michael O'Brien) is Striped Saddlebags, which gets its name from the pale stripes on the sides of the thorax on the female (seen here). Males lack this feature, but both sexes show a very much reduced dark patch at the base of the hindwing, appearing as a stripe with a fairly straight outer edge. In many ways, this species is much more like the closely-related Spot-winged Glider, which is another common migrant with us [photo by Mike Crewe].

OK, time to get out there and check out those saddlebags! Identifying the red ones can be tricky and often it is best to just take lots of photos and review them later in the comfort of a cosy armchair!
Posted by Mike Crewe at 4:52 PM