Who would have thought that just a little over a year since Bebop - our temporarily resident Brown Booby - showed up in Jarvis Sound, off Wildwood Crest, that Bob Lubberman, captain of the Osprey, would be getting a phone call from local fishermen to say there's a "Strange-looking bird on one of the channel markers in Jarvis Sound"! Bob checked it out and the news quickly went out - there's a frigatebird in Cape May!

A nervous bunch of Cape May birders and birding visitors had just enough time to head over to Cape May harbor after an exciting Higbee Beach walk and head out into the sound - luck was with us and the bird was still present. A big beast of a thing with long, hook-tipped bill, black and white plumage and strangely scraggly, pink feet. Aware that the five species of frigatebird can be tricky to tell apart, we took careful note of the bird's features, but it was readily apparent that this was an adult female Magnificent Frigatebird - a great bird to be idling away its day in Cape May and doubtless a waif that had been sent here by Hurricane Isaac.

At the time of writing, the bird's presence is unknown, as it had disappeared from its perch by the time we headed back after our boat trip into the back bays - but we will keep you posted if it shows up again... 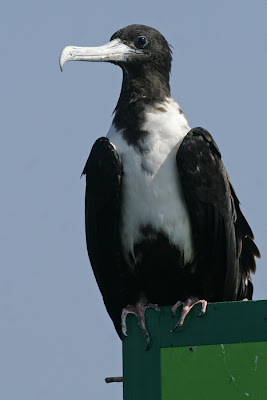 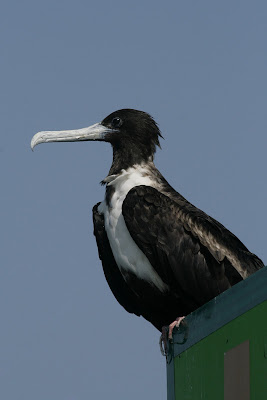 Magnificent Frigatebird, Jarvis Sound, Cape May today. The shape and extent of the white belly and breast patch and the bluish color of the eye ring all help to identify this bird to species [photo by Mike Crewe].
Posted by Mike Crewe at 3:48 PM