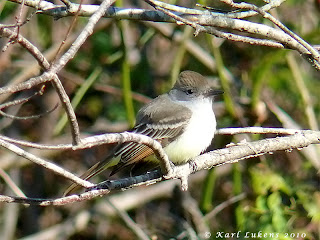 Chris Vogel found the season's fourth Ash-throated Flycatcher this morning, this one at Hidden Valley and photographed nicely (above) by Karl Lukens. There was some suggestion that there were two individuals present there, but this went unconfirmed. Doug Gochfeld noted two Baltimore Orioles in the junipers at the State Park and Tom Reed reported a light-morph Rough-legged Hawk (presumably a juvenile) from Jake's Landing.

I spent most of the day in Delaware waters doing at-sea bird surveys, but did take an awful lot of pictures of the spectacular sunset this evening while coming into Cape May harbor. The below picture is taken from the boat while between the two jetties. The subject is not simply the sunset, but the spectacle of gobs of Northern Gannets attacking baitfish with hopes of getting a little bedtime snack. I counted at least 106 gannets in this picture, and this picture represents less than a quarter of the field of veiw that contained foraging gannets. 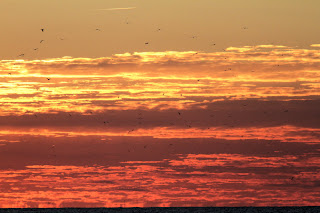 Posted by Tony Leukering at 6:35 PM