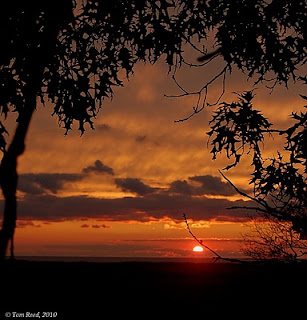 [Tonight's sunset over Delaware Bay, as viewed from Reed's Beach.
Photo by Tom Reed; click to enlarge.]
Before I turn the clock back an hour and head to bed, here's a recap of the day's bird news around Cape May:

There was a small influx of passerines this morning, highlighted by a Tennessee Warbler at the Hidden Valley Extension, a Red-eyed Vireo at the 2-Mile Beach Unit of Cape May NWR, and a Grasshopper Sparrow at Villas WMA. The warbler and vireo are getting to be pretty darned late. There seems to be a larger passerine flight occurring tonight... hitting your favorite sunny field edge in the AM should produce some birds.

The hawk watch was the scene of several interesting sightings today. A Long-eared Owl flew over during the late-afternoon, around the same time that 2 Lapland Longspurs were seen flying around the bunker. The season's Goshawk total has now reached double-digits, courtesy of the four birds that passed today. As always, the day's hawk watch and sea watch totals can be found on View from the Field.

My twilight vigil from Reed's Beach Road this evening was highlighted by a lingering Yellow-crowned Night-Heron, as well as a super cool Short-eared Owl that seemed to emerge from a daytime roost in the marsh. The bird circled up a couple hundred feet and dashed off to the southwest, where it continued its migration high over Delaware Bay.

Lastly, the White-tailed Kite in Barnegat (Ocean County) continued to be seen by many, many birders throughout the day. The kite was again observed from the Barnegat Municipal Dock, in addition to the impoundments just north of the dock. See previous posts for more details. Karl Lukens provided the following photo of this second state record: 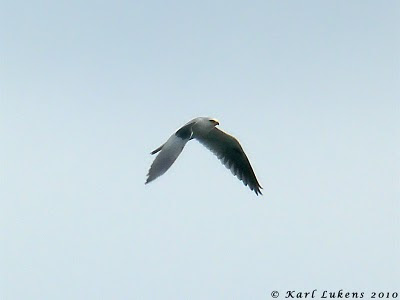