We managed 40 species in the pea soup at the South Cape May Meadows on the last of that weekly walk for 2010. The birds were not without interest - a flock of 20+ Lesser Scaup had dropped into the plover pond, and ~ 5 "Ipswich" Savannah Sparrows ran about amidst the beach grass near the pools left by recent flooding tides. These were the first of this race I've seen, or heard about, this fall. The full lists from this as well as the various weekend field trips are up on Field Trip Reports. 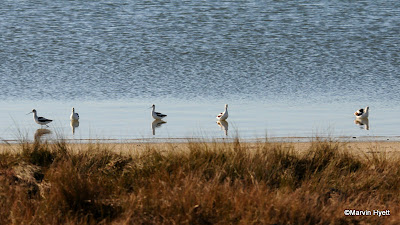 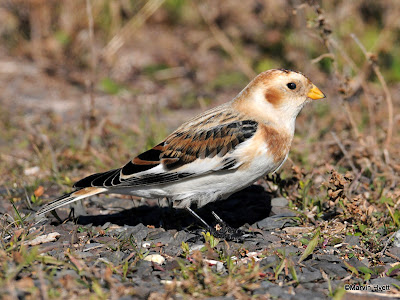 [Someone on today's meadows trip asked what Snow Buntings look like . . . the color has been described as toasted marshmellow. Photo by Marvin Hyett, taken at Brigantine on Saturday.]


It might be a good time for a trip to Brigantine a.ka. Forsythe NWR, Brigantine Division where (I hear from the Sluggs) there were 2 dark morph Rough-legged Hawks yesterday, and American Avocets continue through at least Saturday, 5 from the south dike and another in the northwest pool, according to Marvin Hyett.
Posted by Don Freiday at 5:01 PM