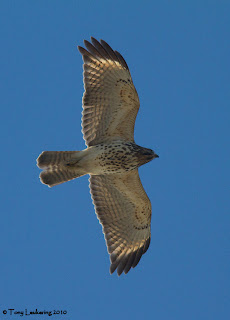 [This juvenile Red-shouldered Hawk made a couple of low passes right over the Hawkwatch platform at Cape May Point SP this morning, much to the delight of the photographers present. Note the tell-tale translucent buffy crescents near the wingtips, a sure-fire field mark for the age and species. Also note the mostly dark throat, a good character to separate the species from similar ages of Broad-winged Hawk. Click on image to see a larger version.]

With the end of the Morning Flight Count for the season at the end of October, our inveterate counter, Tom Johnson, has been conducting a morning flight count from the Hawkwatch platform in Cape May Point State Park. If it still needed doing, Tom's counts each morning have been proving that that site is one of the best places to watch birds of a wide variety of species moving. Yesterday, Tom tallied a single Common Redpoll among the hordes of American Goldfinches and lesser numbers of Pine Siskins. Cave Swallows continue to be daily sights there, and this morning good numbers of Red-winged Blackbirds joined the nearly-constant movement of finches. Rusty Blackbirds, too, are daily, but in fairly small numbers most days.