Lucy puts on a show!

[All pictures are copyright by Tony Leukering; click on image(s) to see larger versions.] 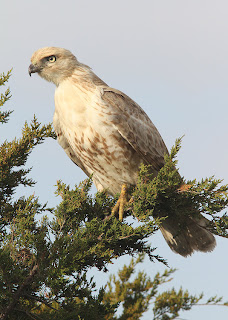 The recently christened Lucy (the "leucistic" Red-tailed Hawk) put on a good show near the Hawkwatch platform this afternoon and, in fact, won a bet for our inveterate hawk-counter when she predicted that it would put in an appearance before 3:30 and showed up precisely at 3:29! I spent a bit of time with her, taking way too many pictures, some of which are presented below.

However, I thought that this might be a good time to delve into the various terms describing abnormally pale aspects in skin and skin-derived features of animals (including, of course, humans). What I learned turned my understanding (derived from "experts" that apparently weren't, lo those many years ago when I was an impressionable youngster) on its head. The primary words considered for a bird such as Lucy are "albinism" and "leucism."

Albinism (the adjective is albinistic), a genetically heritable trait, is the condition in which melanin is abnormally lacking. Melanins are nearly ubiquitous pigments and are derivatives of the amino acid tyrosine. (Interestingly, but completely unrelated to the topic at hand, the Araneae (spiders) is one of the few groups of animals in which melanin has NOT been found.)

Leucism (the adjective is leucistic) is the defect in which cells are incapable of making pigments (at least, according to Wikipedia). That is, no pigments of any kind are deposited in the bits affected by the defective cells.

Lucy is obviously not white, though she (the bird does look large, so it might actually be a female) does have an abnormally white feather or two (check out the single nearly all-white uppertail covert on the left side in the pic, below), so pigments are being deposited in her feathers. That should rule out the defect that is the source of Lucy's name: leucism. However, since brown pigments in birds are melanins, the bird is not albinistic, either. 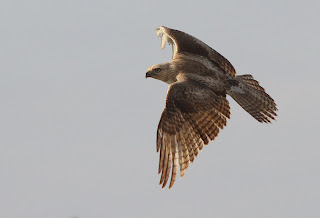 Thus, I find no easy answer to the question of what to call Lucy, other than the somewhat obscure term used in ornithology (but one not associated with a particular pathology, at least of which I'm aware): "dilute plumage." So, should we start calling her "Dilly?" That's just silly. I will have to contact a friend in Colorado who has an interest in aberrant plumages and knows something of them and their causes and nomenclature; I'll get back to you. Meanwhile, we can just enjoy an interesting-looking Red-tailed Hawk that has, perhaps, arrived to spend the winter. 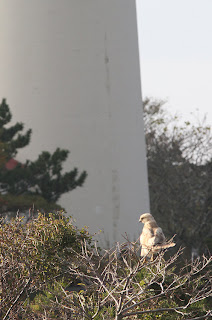 [The coveted "lighthouse shot" of Lucy.] 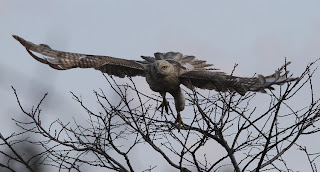