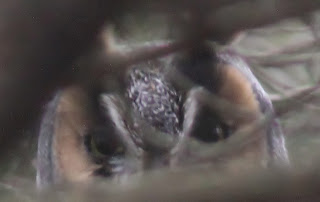 Now that I've got your attention....

Yesterday's first day of the 'Rarities Roundup' weekend that might become a tradition here, produced a reasonable number of birds of interest, though little of true rarity. The above-pictured Long-eared Owl was found by Steve Bauer at an undisclosed (as is typical for this venue) location on Cape Island (photo copyright by Tony Leukering; click on image to see larger version). Observers on the bayshore noted a strong movement of Red-throated Loons (e.g., 44 passing Miami Beach in five minutes around 9:30 am), while the Seawatch scored Harlequin Duck, Little Gull, and Razorbills. As was the case on the previous day, Cave Swallow was the dominant species of hirundine present. In fact, it may have been the only species of swallow noted, with up to 12 being seen (those coming into roost at the Congress Hall; noted by Kathy and Roger Horn), but with the species being seen at numerous Cape Island locales and at the Seawatch. The most interesting bird of the day, however, was the single Common Redpoll noted by Jim Dowdell among a large flock of American Goldfinches at the third field (westernmost) at Hidden Valley.

So far this morning, Michael O'Brien noted an adult Black-legged Kittiwake flying past the Hawkwatch, of all places, while Tom Reed found a Grasshopper Sparrow at the Schellenger tract of Cape May NWR among a host of gun-toting hunters. Vince Elia reported that two Cave Swallows were flying around behind Lucky Bones (Melissa Roach reports the species from the Hawkwatch, too) and Glen Davis noted a Northern Goshawk at Tuckahoe. The Seawatch, though experiencing a less-than-steller flight today, still has scored a fly-by Red-necked Grebe and the lingering adult male Harlequin Duck.
Posted by Tony Leukering at 11:48 AM