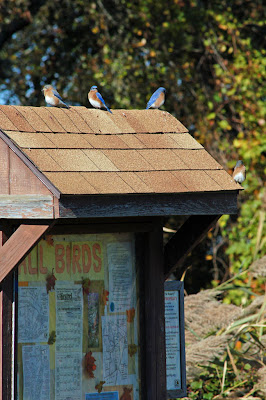 [The bird with the sky on its back and the earth on its breast: Clay Sutton found these Eastern Bluebirds promoting CMBO programs at the Beanery on Sunday. Click to enlarge photos.]

We're at the height of Eastern Bluebird migration, and though by far most (sometimes hundreds per day) are detected flying overhead, often by their mellow chur-lee or chur i-lee flight call, a few put down. The Beanery a.k.a. Rea Farm is arguably the best place to see them, witness Clay's photo above.

Winter approaches, a time to watch birds in the low angle light and read old books in the long, long evenings, like the Arthur Cleveland Bent series on the Birds of North America: "The bluebird is well named, for he wears a coat of the purest, richest, and most gorgeous blue on back, wings, and tail; no North American bird better deserves the name, for no other flashes before our admiring eyes so much brilliant blue. It has been said [by H. D. Thoreau - DF] that he carries on his back the blue of heaven and the rich brown of the freshly turned earth on his breast; but who has ever seen the bluest sky as blue as the bluebird's back?" 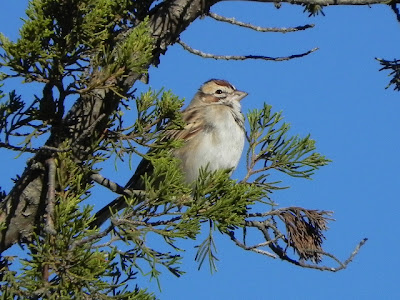 ﻿[Mark Garland tracked down the Lark Sparrow near the butterfly garden at Cape May Point State Park yesterday.]
Posted by Don Freiday at 6:12 AM