Cape May (Another Eider Year?) and Brig 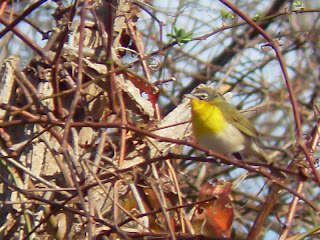 [Any yellow in November is good yellow - Tiff Kersten had this Yellow-breasted Chat at Higbee Beach WMA just inside the entrance to the fields yesterday.]

Tony had a nice batch of waterbirds at Poverty Beach including 47 (!) Common Eiders, all three scoters, 2 Great Gormorants and 2 Royal Terns.  Poverty Beach is the beach north of Cape May City, including the pilings off the Coast Guard Station, where you can't go but which can be scoped legally from the south.

A Northern Goshawk was seen perched at the Cape May Point State Park Hawk watch.

A trip around the dike loop at Brigantine a.k.a. Forsythe NWR yesterday afternoon featured birds with upturned bills, including 4 American Avocets in Turtle Cove, looking south from the south dike observation tower, nicely spotted by Kathy Horn. It was a low low tide thanks to the full moon, and the long-legged American Avocets were way out with the ducks in the cove. The other upturned bill was in front of a Hudsonian Godwit that flew over us on the north dike, giving a single-sylallable call. The godwit settled on the marsh a couple hundred yards north of the north dike. A flock of 25 Snow Buntings bounced around various bare rocky patches between the north dike and the channel north of it.

Brig was packed with ducks, especially Green-winged Teal and Northern Pintail, which were in the thousands, as were American Black Ducks, not mention 50+ Tundra Swans, including some pink-billed juvs. I hear 18 Tundra Swans flew over the South Cape May Meadows today.

By climbing the south dike observation tower at Brig and looking north over the west pool, scoping over the dike that runs through the center, it was possible to see a neat mixed flock that contained 17 Canvasbacks, Ring-necked Ducks, a few American Wigeon, and both scaup. The duck mix was further spiced by Hooded and Red-breasted Mergansers, Wood Duck,  Ruddy Ducks, and Bufflehead, all scattered throughout the refuge.

We ran into the group headed by Scott Barnes and Lloyd Shaw from SHBO, who had Cave, Rough-winged, and, rarest for the latest of the season, Bank Swallow, plus a Least Sandpiper.  Nobody seems to have found the American Golden-plover reported at Brig earlier in the week, nor did we find any Rough-legged Hawks, though multiple Bald Eagles were evident most of the time and a couple Merlins blew past.
Posted by Don Freiday at 6:28 AM