[The poor Tundra Swan at Cape May Point State Park getting chased, again, by the awful nasty mean rotten and alien, but not ugly, Mute Swan. One more reason not to introduce non-native wildlife. Photo by Tony Leukering, click to enlarge.]

We did find some owls yesterday morning, we being me, Dave La Puma, Doug Gochfeld, and Tom Johnson, a total of 3 Long-eared Owls plus a Great-horned hooting at Cape May.  Owl specifics generally should not be disclosed, so I'll stay mum on the subject - except to say that owls migrate on cold nights with light north winds - you sometimes can see them in flight against the first break of dawn, and we did -  and they need roosting cover when they get here, and can be found in cedars or pines (and were). A nocturnal flyby American Bittern and a generally really cool duck flight in the dark were other highlights. 3 Northern Goshawks were recorded at the hawkwatch yesterday, and I understand one was banded today. Somewhere in the mass of unsorted pics from the past few days I've got goshawk shots, hopefully there will be a gos photo with an i.d. tip or two here soon.

Doug Gochfeld has had a busy day at the seawatch today (Wednesday), including passing Black-legged Kittewake and Razorbill. There are 2 Hooded Mergansers and 2 Bufflehead on Lighthouse Pond today, according to Mike Crewe, the latter an arriver there, and Mark Garland reports that the drake Eurasian Wigeon is on Lighthouse Pond again today, and Blondie, the strawberry blond Red-tailed Hawk, is still around as well. 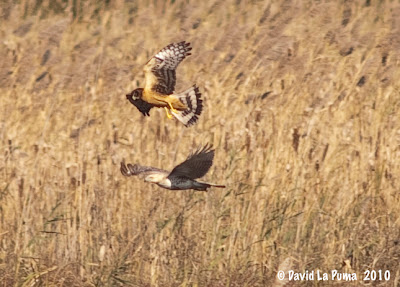 [Dave La Puma caught a harrier, perhaps "the" immature female harrier that has been harrying everything at the state park, harrassing "Blondie." Guess Blondie's not as tough as the Clint Eastwood character of the same name in The Good, the Bad and the Ugly. . .]
Posted by Don Freiday at 4:14 PM