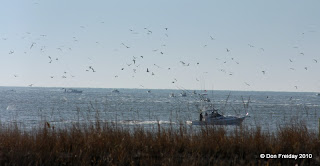 The story yesterday (Sunday) was the Avalon Seawatch, and the place to read about it is Steve Kolbe's account on View From the Field, though the action offshore was certainly visible pretty much anywhere along the coast. In the hour or so I spent at the seawatch yesterday afternoon, a Red-necked Grebe (picked by Doug Gochfeld), several small flocks of White-winged Scoters, and 4 Common Eiders spiced the incredible passage of Northern Gannets, Red-throated Loons, and scoters. Steve just (10:43 a.m. Monday) had an immature Iceland Gull fly south past the seawatch.

The hawkwatch wasn't so bad yesterday, either. Tom Johnson was crossing the parking lot at the state park shouting "Goshawk!" as I got out of my car, while a Peregrine circled over Melissa's head above the platform.

Melissa was fiddling with her gloves and hood as the Peregrine circled, and I busted on her when I walked up: "Hey counter, did you get this bird or what?" Her reply was something to the effect of having been on that Peregrine since it was over Cape May City. . . which is often the case, the counter picking and clicking a bird before peanut gallery types like me know. 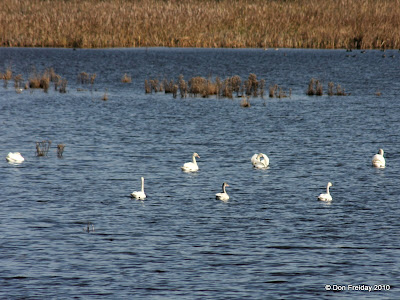 [An about face from usual, this family group of Tundra Swans landed on on Bunker Pond yesterday and not only ignored the aggressive Mute Swans, but actually seemed to turn the tables for a time. Notice the slim necks on the Tundras, the 3 foreground birds. When Mute Swans arc their wings, they aren't trying to look pretty. Think of the display like that of an angry or alarmed dog raising its hair.] 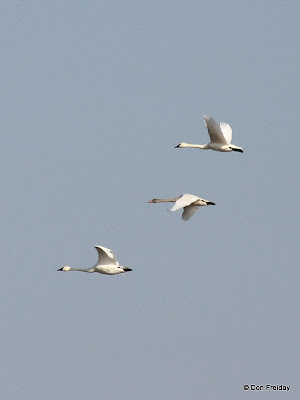 [Eventually the Tundra Swans flew off, but we were watching a Golden Eagle at the time and didn't see what happened. Note the juvenile in the middle, with the pink bill. Back in the day, I used to worry about telling immature "Whistling" (now Tundra) Swans from immature Mutes. The field guides show the similar bills (Mute's is black at the base) but the birds are shaped quite differently - Tundras are skinny-necked and short-tailed.] 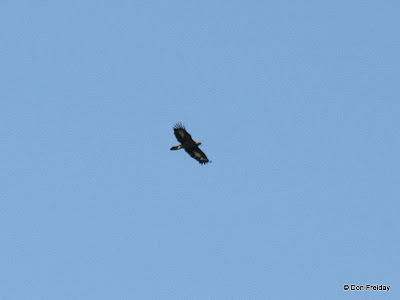 [Repeat Golden - this eagle was seen yesterday and the day before, told by the long central tail feathers on this particular individual.]


I was working Higbee Beach for Orange-crowned Warbler yesterday morning (unsuccessfully), and a Clay-colored Sparrow popped up from the sorghum in the third field. After taking a few photos with my loaner camera, I texted it to the locals and then looked at the shots. . .to realize that I had been photographing the moon last night, never reset the exposure, and my "confirming" photos were underexposed 2.5 stops and essentially black!

Meanwhile, Vince Elia shows up and we look for the bird and can't refind it. Later on the hawkwatch, I got a litle razzing. . ."Yeah, well, I saw Don's truck at Higbee and was hoping when the text message came through it would be him with something good, and it was, but then we couldn't find the bird, and he said he took pictures but there was something wrong with the camera, hmm. . ." I said "I thought I had some 'street cred' around here. . ." All in good fun, of course, but I wouldn't blame anyone for asking questions about a rare bird.  It's getting late for Clay-colored, though there are a very few winter records. 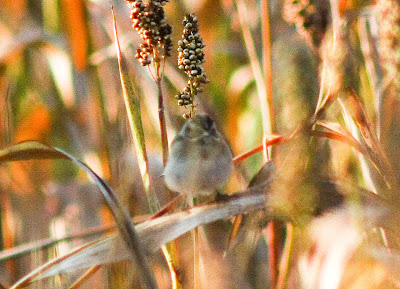 [Thank-you, Adobe Lightroom. Recovered photo of a Clay-colored Sparrow, in the sorghum in the third field at Higbee Beach WMA yesterday. Like other Spizella sparrows, this one was small, small-billed and long-tailed. Key marks on Clay-colored included an obvious buffy wash across the breast and white malar (jaw stripe) bracketed by obvious "mustache" and lateral throat stripes. The central breast spot, by the way, was there and not an artifact, a reminder that central breast-spots can show up on birds that aren't supposed to have them. I noticed Sibley put a breast spot on his non-breeding Clay-colored, while if you relied on the National Geographic and Kaufman guides you'd think something was amiss.]
Posted by Don Freiday at 10:58 AM