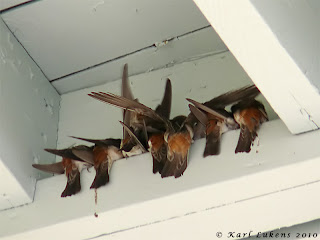 Karl Lukens provided the above photo of Cave Swallows at Congress Hall in Cape May around 1:30 pm. Doug Gochfeld reported a rough estimate of 75 there around 3 pm, but said that it was difficult to count them in the tight heat-conserving mass in which the birds were perched, though he could count at least 55 tails.
Posted by Tony Leukering at 3:47 PM