[I know it's a family-style blog, but. . . Joey Lounsbury caught these Piping Plovers at Two-Mile Beach on Tuesday. Joey's a young birder who was visiting Cape May with his father. Piping Plovers are tough to sex, but there's no doubt here, offering a good chance to compare the thickness of the dark forehead stripes, in particular. Male Piping Plovers are more strongly marked overall, including the thicker forehead stripe and a broader collar that is more likely to be complete, or close to it, than on females, but there is overlap. Click to enlarge]

Dave Lord reports that Wood Thrush was in at Vine Street near Belleplain yesterday morning. 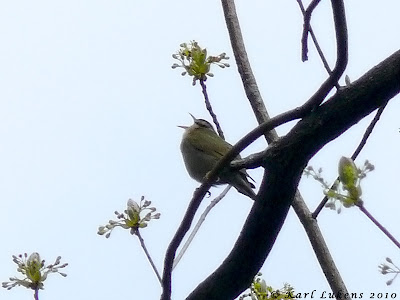 [Worm-eating Warbler belts out a song in Belleplain at the triangle Thursday. Photo by Karl Lukens.] 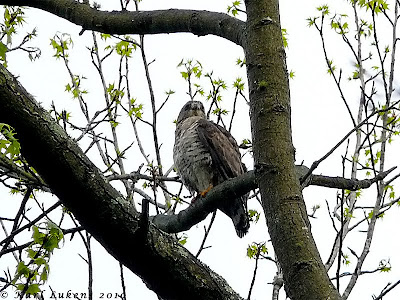 [Broad-winged Hawks are back, this one was at Belleplain. Photo by Karl Lukens.] 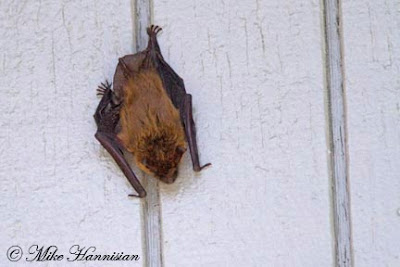 [Mike Hannisian had this Red Bat near Goshen.]

[Pectoral Sandpiper at the plover ponds, Cape May Point State Park on Tuesday, by Joey Lounsbury. ]

Please support this site, and birds and birding in Cape May, by joining CMBO. Simply visit the membership page and scroll down for all membership options. Join by May 21 to receive the special 2010 edition of CMBO’s annual journal, the Peregrine Observer, featuring accounts and photos of the 2009 Ivory Gull; Pete Dunne's story about his return as Cape May Hawk Counter; 2009 Migration Count results; 2009 Notable Birds; and more! By the way, 60% of our members are from out of state or country. It's only $39 (ind.) and you can join online! Current members (thanks!) will automatically receive the Peregrine Observer, but please invite your friends to join!