What a crazy day!

I just had to run back home to quickly get this put up on the blog (and to get my phone that I left at home)! I was just at Villas WMA down near the red shed, when I noticed some commotion overhead. There were a few Laughing Gulls chasing what must have been small insects that had just emerged. They were fairly high up, but I started scanning the birds up there. There were some 15 or so Laughers, but there was also some other small gull that got my heart racing. I'd once seen that very few of a SABINE'S GULL, but it was on a more typical fall bird in Colorado! What was a first-cycle Sabine's Gull doing in Cape May in early April? They should still be on southern hemisphere winter grounds!

But, it didn't stop there! While I was trying to get pix of the Sabine's, I noticed a smaller, darker, slimmer bird that gave me the impression of a nighthawk! Whoa, there were two of 'em. No, THREE OF 'EM! All Commons (I did check them over carefully), but they shouldn't be here now, either! WOW! I managed to get pix of all three, but never in the same field of view. Below, is the best that I could do. Only two of the nighthawks are in the frame, but the Sabine's is also present, as is an American Kestrel, all chasing after bugs. There are two weird things about this pic (well, OTHER than the Sab Gull and the nighthawks): 1) none of the Laughing Gulls are in it and 2) an adult Peregrine decided to take a jaunt through the field of view while I was taking the picture -- s/he barely stayed in the frame! 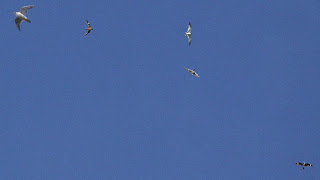 I gotta get back out to see what else is out there!
Posted by Tony Leukering at 12:03 PM