Flickers, Kinglets and other Good Things; is Stilt Gone? 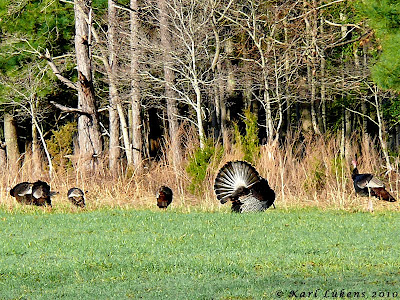 [Karl Lukens photo'd these lusty Wild Turkeys in Belleplain State Forest yesterday. CMBO has field trips in Belleplain Tuesdays, Thursdays and Saturdays in April and much of May. Click to enlarge photos.]

Birds were all around us at the start of the Higbee Beach Walk, with waves of Northern Flickers, lots of Yellow-rumped Warblers and Golden-crowned Kinglets, a couple Palm Warblers, just a real nice early season wave. Add a bunch of Eastern Phoebes and a few singing Brown Thrashers. The bay was like glass, with its usual Red-throated Loons, Northern Gannets, etc. The kinglet wave was noted pretty much everywhere around Cape Island. A Snow Goose hitched to a flock of Canadas flew past and the whole lot settled on the bay. Pre-walk, Dave La Puma and I stopped at Sunset Beach to watch the usual morning exodus of gannets, the collection of loons and scoters, and just because it's a spot where something good could appear even if you only spend 5 minutes - in this case, in the form of 3 White-winged Scoters. The full Higbee list is up on Field Trip Reports.

A quick digest of bird news is in this week's hotline, below. There have been a number of arrivals, including a Whip-poor-will heard at Turkey Point by Pete Dunne this morning. Tom Reed et. al. counted up a nice lot of 105 Pine Warblers, 4 Yellow-throated Warblers, and 2 Louisiana Waterthrushes at Belleplain this morning.

Dave and I, and Michael O'Brien, looked for the Black-necked Stilt at West Cape May after the walk, without success.

[Great Cormorant in breeding plumage, next to a Double-crested on the Concrete Ship yesterday. Photo by Kevin Inman.]

[Three White-winged Scoters exiting the bay this morning. White-wingeds are by far the least common of the scoters off NJ.]