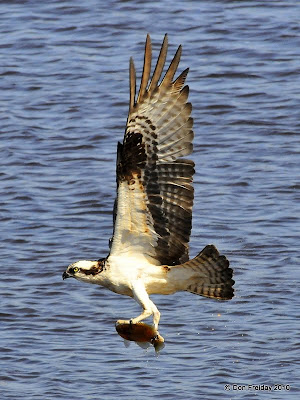 The hawk watch platform at Cape May Point State Park makes an ideal place to meet someone, with its views and benches, one reason many of our workshops meet there - and also why I found myself there this evening, waiting and watching swallows and terns pass, and as many as five Ospreys fish over Bunker Pond at once. They were catching Bluegills - a freshwater fish. Many people assume Bunker Pond is saltwater, but it is not, and therefore important not only for food but fresh water for bathing and drinking for otherwise marine species, like terns and gulls for example.

An adult Bald Eagle, presumably one of the Cape Island pair, appeared on the scene almost immediately after the Osprey pictured caught his fish; luckily the Osprey beat it out of there before the eagle arrived, a consequence of apparent vigilance, and in fact the full sequence of photos showed that as soon as the Osprey caught the fish it began looking left and right, up and down, presumably for predators. The eagle was later seen perched over Lighthouse Pond east.

[This tiny American Copper butterfly was on the gravel path near the platform tonight. Note the mostly orange forewing and the narrow orange band on the gray hindwing. Coppers are often seen as a passing flash of orange, but it was cool this evening, so this one rested in the sun.]