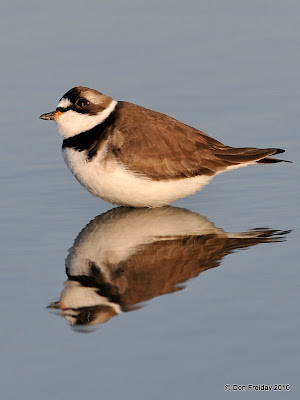 [Semipalmated Plover checking out a passing gull at the first/west Heislerville impoundment last night. When you see shorebirds do this, it's not a bad idea to look up - they may be cocking their head at a passing raptor. Click to enlarge photos.]

Between CMBO's 3 weekly Saturday field trips (to the Beanery, Belleplain and Cape May Point), the Cruisin' for Loons and Shorebirds boat trip, the Intro to Birding by Ear Workshop Mark Garland and I led, and general observations by many friends, we dipped our toes pretty deep into Cape May birds today. Lists and notes up on Field Trips Reports tell part of the story; highlights include Broad-winged Hawk, 2 Bald Eagles, Wilson's Snipe, Solitary Sandpiper, and a nice American Bittern at the Beanery; great southern breeders at Belleplain; 2 Pectoral Sandpipers and a swallow show at the state park for the afternoon Bird Walk for All People; an unusual (for the location) male Harlequin Duck and breeding plumage Common Loons aboard the Osprey in the back bays; a pile of singing Yellow-rumped Warblers plus singing Palms, Pines, Ruby-crowned Kinglet and others at Villas WMA for our ear-birding workshop; and 2 Prairie Warblers, Yellow-throated Warblers, stacks of vocal Clapper Rails, and others at Jake's Landing, also for the workshop.

Doug Gochfeld (you may remember - our swing counter last fall) sent me this note - a friend of his had planned and then executed a trip to Turkey Point Friday: "Thanks for the help. He went down last night and got: Chuck-will's-widow, Whip-poor-will, Great Horned Owl, Barn Owl, E. Screech-Owl, Seaside Sparrow. Also: Yellow Rail, Virginia Rail, Clapper Rail. All of the rails were heard only after 3:30 AM, after the Moon finally set (apparently it was very bright last night). None had called up to that point." A pretty kickin' Friday night! CMBO is planning a similar expedition for early May, though not for the wee hours of the night.

Tom McParland detected a Red-headed Woodpecker on the Yellow Trail at Cape May Point State Park today, the first RHWO I can recall of 2010. They didn't winter at the Villas WMA this year, despite the great habitat. 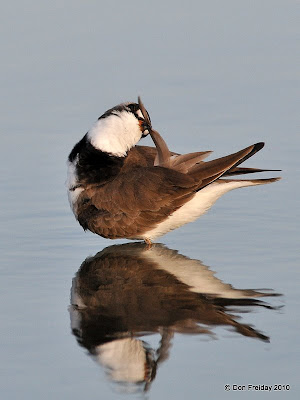 [My sense is that newly arrived birds have a lot of preening to do. This Semipalmated Plover at Heislerville yesterday evening seemed tired, and alternated just standing with some serious feather care.] 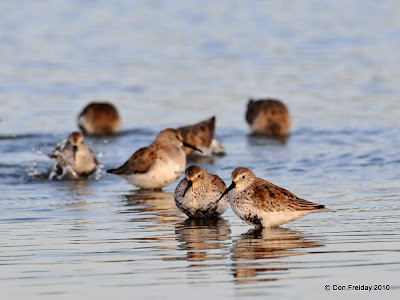 [Dunlin are in mixed stages of breeding plumage now.]

[These yellowlegs gave a clinic on distinguishing Lesser (right) from Greater last night at Heislerville. Compare the bills, the overall size, and the contours of the chest.]

I heard via Dave Lord of an Eastern Wood-pewee at Belleplain along Route 550 - not sure if it was Dave's sighting or not yet, and it would be record early. Hooded Warbler made it to Belleplain today, after the arriving bird at Higbee yesterday, with one on New Bridge Road found by Janet Crawford. Vince Elia had 3 Little Blue Herons and a Tricolored Heron over the meadows this morning. And via his jerseybirds list-serve post, I hear Steve Rodan had, among other things, a breeding-plumaged Red Knot at Nummy Island on Thursday, the first breeding-plumaged bird I've heard of and also the first I've heard of since the February blizzards. Steve also had a flock of 40 Whimbrel, the largest group reported so far this spring.

We've got some crummy weather ahead in the near term, migration wise, but after Sunday and especially, the end of the coming week (Thursday, in time for CMBO's Belleplain walk? Friday, for the Higbee walk?) looks very interesting. Part of the "big flight equation" is poor migration weather beforehand, to slow migration and cause birds ready to move to stack up. Another part, in spring, is when are neotropical migrants finally primed and ready to move into to NJ? The answer is the very tail end of April and the first few days of May. We'll see - I'll leave the predictions to Dave La Puma.
Posted by Don Freiday at 7:39 PM