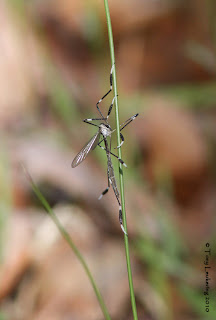 On a cool, breezy, overcast/drizzly day with little in the way of birding being done (or, at least, with little in the way being reported), I had time to edit more pictures from last week. I was particularly interested in getting to my pix of the Phantom Crane Fly (Bittacomorpha sp.) that I photographed at the Villas W.M.A. on Earth Day (22 Apr). These bugs (see previous "bugs" post concerning terminology; this is not a true bug, Hemiptera, but a fly, Diptera) are denizens of the patchy shade in forest understory. The lowest segment of each leg is laterally expanded creating wider surfaces that can obtain extra lift from the slightest zephyrs in such protected habitats. This extra lift must help a lot, as this group may have the smallest wing length:body length ratio of any of the crane flies that I know. Though it may seem that their obvious black-and-white leg patterns would make them stand out, in fact they can be very hard beasts on which to focus as they float by below one's knees over the sun-dappled leaf litter. It is one of the critters for which I look whenever making the loop through the wet woods at Villas W.M.A. in spring.

Crane flies (Family Tipulidae), in general, are often misidentified as giant mosquitoes (Culicidae, a different family within the Diptera) by the layman. They are, in general, much larger than are mosquitoes, with Bittacomorpha being among the largest crane flies in the east with body lengths approaching 1 inch (and with this bug having a considerably longer legspan). Adults of some crane fly species are nectar feeders, but most exist as adults only to reproduce and do not feed in that stage. They are relatively weak fliers, with this genus standing out in this regard.
Posted by Tony Leukering at 4:24 PM