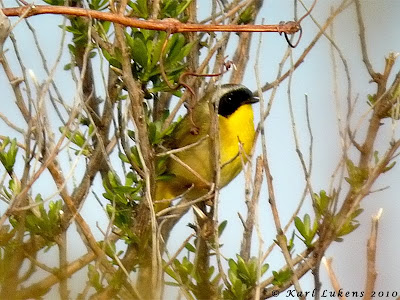 [Karl Lukens photo'd this Common Yellowthroat at Cape May Point State Park during the walk there today. Nice to see that yellow! Click to enlarge.]

Dave Lord sent a report about today's Peaslee's WMA walk: ". . . enjoyed a beautiful look at a Prothonotary Warbler, at the intersection of Dam Rd. and Rt 49., with two others singing in the background. From there we headed to First Avenue, where another Louisiana Waterthrush proved co-operative, and a Blue-Headed Vireo gave a few short sections of it's song. Back in Belleplain, a nice Worm-Eating Warbler showed himself at the Triangle. . ." - makes you wish you were there, and you can be, for the final Peaslee Walk next Wednesday, April 28, which meets 7:30 a.m. at the Belleplain State Forest headquarters, off Route 550 west of Woodbine. No preregistration is needed.

Migrants were lighting up the radar last night, but Vince Elia reports the main species present at Higbee this morning was. . . mosquitoes! It's going to be a tough year with them thanks to all the rain, and that they are bad this early does not bode well. No matter - get yourself a bug shirt and some repellent, and repeat the chant, "insects are a sign of a healthy environment." Vince did have Blue-headed Vireo, Prairie Warbler, and a few Hermit Thrushes.

[Eastern Willets have returned to many of their breeding sites. This one was at Reed's Beach this morning, part of a trio that bickered and chased continuously. Willets have a long term pair bond, but un-mated singles intervene, especially at the start of the season or if some big event, like a storm, disrupts nesting.]
Posted by Don Freiday at 12:04 PM