[These three Glossy Ibis fed in a flooded field along Route 47 near Goshen this morning. The feline in the background annoyingly flushed a shorebird as I pulled up, perhaps a Pectoral Sandpiper. Click to enlarge photos.]

Dave La Puma and Tom Magarian detected 6 Pectoral Sandpipers on Lehner Road near the "Pickle Factory" this morning, which grew to 7 per Tony Leukering and then 8 per Dave Lord. Probably be 20 by the time I get there. . . Two Horned Larks were also in this field. Lehner Road runs northeastward from Route 47 near Eldora towards Route 347. The birds were in a field within the triangle formed by Lehner and Paper Mill Road/Spur 550.

Common Yellowthroats were detected at Turkey Point by Pete Dunne and Peaslee WMA by Karen Johnson, who is out on CMBO's Wednesday field trip there.

I cycled along the bay in the vicinity of Villas early this morning, where Northern Gannets continue to stage a show, and a Black-and-white Warbler sang from some mature oaks in a neighborhood. I didn't look closely at the gulls, but there were still plenty of Bonaparte's along the shore. 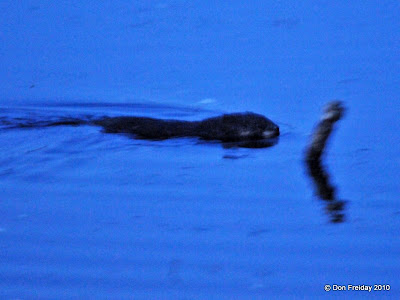 Last night past sunset a Great-horned Owl hunted very visibly from treetops along the trails at Cape May Point State Park, multiple Blue-winged Teal occupied Bunker Pond, and the frog chorus, including the first Fowler's Toads I've heard this spring, was deafening.

Please support this site, and birds and birding in Cape May, by joining CMBO. Simply visit the membership page and scroll down for all membership options. Join by May 21 to receive the special 2010 edition of CMBO’s annual journal, the Peregrine Observer, featuring accounts and photos of the 2009 Ivory Gull; Pete Dunne's story about his return as Cape May Hawk Counter; 2009 Migration Count results; 2009 Notable Birds; and more! By the way, 60% of our members are from out of state or country. It's only $39 (ind.) and you can join online! Current members (thanks!) will automatically receive the Peregrine Observer, but please invite your friends to join!