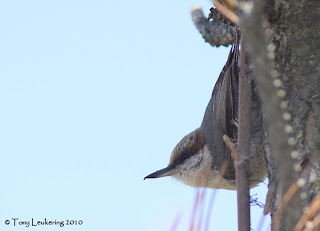 Tom Magarian refound the Brown-headed Nuthatch at Cape and Lincoln at the Point this afternoon, to the pleasure of many a local that hadn't been able to get there two mornings ago. It spent much of the rest of the afternoon foraging in the pines at the end of Cape Ave., often right near the Lincoln Ave. crossover, where the above picture was taken.

A number of adult Broad-winged Hawks were seen on the Point this morning, with the max one-time count being of three. There is a good chance that the total was larger than that. Also among the large number of vultures, particularly Blacks (>40 individuals), were at least four Bald Eagles (two adults, two immatures) and a sizable, but undeterminable, number of Red-tailed Hawks, mostly juveniles. A few Stevens St. hawkwatchers were treated to a displaying Horned Lark. The species is now a rare and local breeder here, but did breed at the site last year.

Three Cattle Egrets spent the day at the Willow Creek Farm on Stevens St., with photos of two of them here. The second one's bill was at the candy-corn stage on its way to the typical coloration of breeding condition. 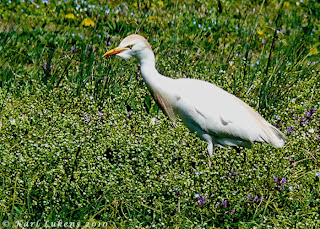 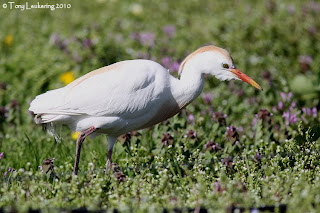 Five Double-crested Cormorants were fishing on Lily Lake this afternoon, close enough to Lake Ave. to get some good pictures, including the below. This picture nicely illustrates the reason for the bird's name. 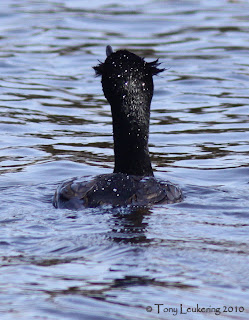 With the predicted southwest winds tonight, we're hoping for a nice influx of migrants on the morrow. Keep your browser tuned to this station for further details!
Posted by Tony Leukering at 8:07 PM