It started with a bird.

Yesterday, Josh Nemeth and I birded Villas WMA hoping for spring migrants, but mostly encountered local breeders. Perhaps the highlight was the Blue-gray Gnatcatcher nest that Josh found under construction by both members of the pair near the NE corner of the property. Today, I revisited the WMA and one of my foci was to photograph the nest and put a pic up here. I see that Don already beat me to the punch on that one, but I already spent the time and effort photographing and editing, so here it is. I can one-up Don in that both members of the pair are in my photo! If you cannot find the second bird, look at the nest carefully. 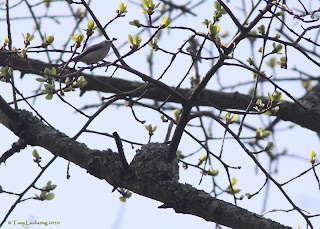 With spring migration being lackluster, at best, for the past few days, but with reasonable weather, my sights and camera have turned to bugs. "Bugs" is a term that some of us use for Lepidoptera (butterflies and moths) and Odonata (dragonflies and damselflies, aka "odes"). Bugs are now emerging in ever-larger numbers, both in individuals and in species and I even snagged a couple of lifers this morning.

Today, with the sun out and the trees not dripping with birds, I spent more time and focus on looking for newly-emerged bugs. I found a few Harlequin Darners (Gomphaeschna furcillata; lifer!) basking on a tree trunk and thought that I'd clean up one of the pix and present it here. Of course, Don beat me to that one, too. 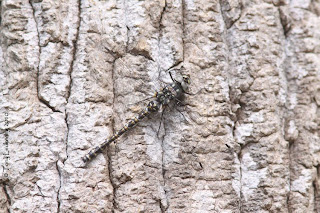 My first lifer ode of the day, though, was Mantled Baskettail (Epitheca semiaquea). 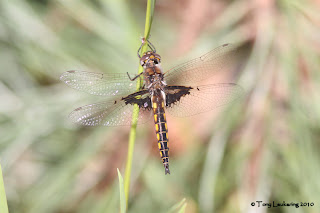 And finally, ode-wise, though Mike Crewe beat me to putting up a pic of Blue Corporal (Libellula deplanata, I thought that I'd add a pic of a female (Mike posted a male). When I started dragonflying oh those many years ago, there was only one corporal and it was called Corporal Skimmer. We now have Blue and White corporals -- ain't taxonomic change great! 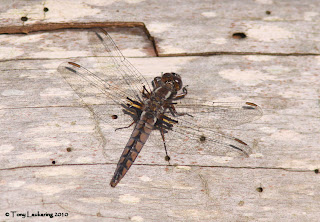 More and more butterflies are also emerging and I saw my first Eastern Tailed Blue (Cupido comyntas) of the season yesterday at Villas WMA... 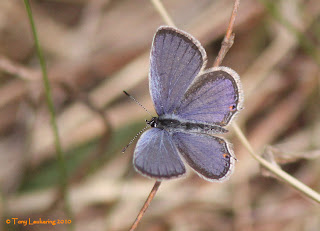 ... and my first Falcate Orangetip (Anthocharis midea; you can just see some orange on it) of the year yesterday at the chunk of Cape May National Wildlife Refuge just west of Rt. 47 at Green Creek. 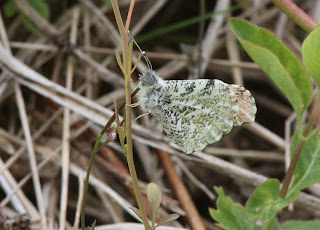 Finally, bug-wise, I thought that I'd really stretch things and post a picture of a syrphid fly, known colloquially as "flower flies." Though I don't even know the genus of this one, I believe that it's a member of the family Syprhidae, many of which are obvious bee mimics. 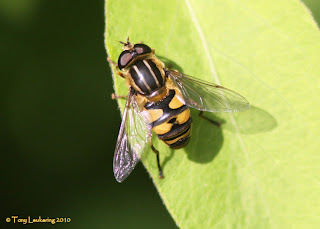 It ended with a bird (apologies to Juno); a spanky Chipping Sparrow yesterday at Villas WMA. 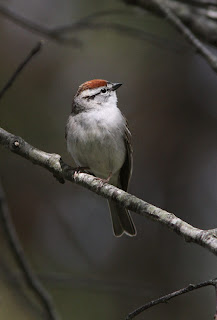 Posted by Tony Leukering at 2:38 PM