Villas: Pleasant, but light on warblers

The early-morning walk at the Villas WMA was well attended, by both participants and leaders, with about 10 of each, including participants from both Colorado and Washington. Unlike the birding on the Point, our birding was nearly warbler-free, until the last 15-20 minutes, when male and female Pine Warblers and four spanky Yellow Palm Warblers brightened up the day. A male Eastern Bluebird assisted in that brightening. Other species of note were a mostly uncooperative, but singing, White-eyed Vireo, flyover Glossy Ibis and Common Loons (2), three species of swallows, five of woodpecker (including Yellow-bellied Sapsucker), two of nuthatch, and Blue-gray Gnatcatcher. The local adult male Cooper's Hawk did not make an appearance, but the local male Red-tailed performed nicely early on.

After the trip (and breakfast in town), I headed to Miami Beach as it was approaching low tide and I wanted to see if either of the Black-headed Gulls was still around. I was not disappointed, with excellent looks and my best-yet photo ops. Scott Whittle's photo workshop arrived after I'd put the word out and we worked the bird a bit, obtaining even better photos. The best of mine is below.
[Click on image to see a larger version.] 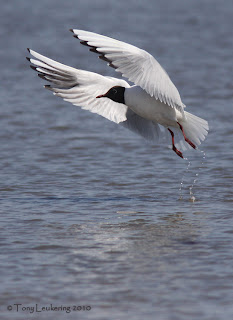 Posted by Tony Leukering at 1:00 PM