Like Fall, with Fewer (but Prettier) Birds; + WIPH & 3 White-faced Ibis

[I set out looking only for something beautiful this morning, and found it in this Yellow Warbler, "whisper-singing" at the Stone Harbor Bird Sanctuary. Click to enlarge photos.]

Figuring out where to go birding each morning is calculated guessing, but this morning's west gale meant 1) somewhere out of the d__n wind and 2) perhaps migrant traps on the Atlantic side got birds with this weather? How about the Stone Harbor Bird Sanctuary?

This former rookery between Second and Third Avenues in Stone Harbor is still worth checking for birds, migrants specifically in spring and fall, even though the heronry hasn't been occupied for years. The side along Second Ave. is out of the wind, and held a Scarlet Tanager, Black-and-white Warbler, Yellow Warbler (pictured), 10+ Chipping Sparrows, Hermit Thrush, and a few others. 16 Great Blue Herons flew in off the Atlantic, presumably nocturnal migrants that wound up offshore thanks to the wind, an American Kestrel passed, and a very strong Double-crested Cormorant flight was underway. It felt very much like a day of fall migration, with birds in breeding plumage and the cormorants flying the wrong way. Or like the classic migrant trap experience it was - a sometimes odd assortment of birds finding themselves where they'd rather not be (too far east in this case, and over not much habitat) and plopping into the best they could find.

Driving out Stone Harbor Causeway towards the parkway, all the day herons were easy to spot on a flooding tide, including one each of Tricolored and Little Blue, and even a flyby Green.

In other news, the report from yesterday's Hidden Corners of Belleplain field trip is up on Field Trip Reports, along with Mike Crewe's account of this morning at Cape May Point and today's Peaslee report. I hear that Dick Veit had 3, count 'em, White-faced Ibis at Heislerville yesterday, but several observers have gone up there and struck out. Tide is important at Heislerville, and it is high tide that puts birds in the drawn down impoundments, something any of you World Series of Birding teams out there are undoubtedly considering for May 15.

The Wilson's Phalarope on Tabernacle Road was present until day's end yesterday, no word yet for today.

[More beauty, a Prairie Warbler at Jake's Landing during our bird song workshop over the weekend. The brushy area between the first and second white pine groves there often harbors this species, and soon if not now, Blue Grosbeak and Indigo Bunting, too.] 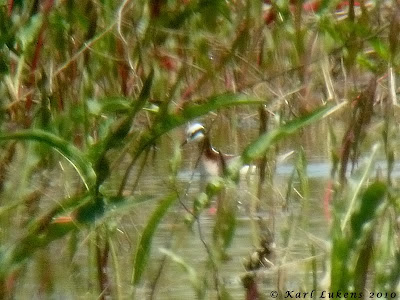 [Karl Lukens photographed the female Wilson's Phalarope on Tabernacle Road. Not a hard bird to i.d., but Tom Reed advised that it disappeared behind the weeds periodically. This pond, really a flooded field, has been interesting all spring, collecting at various times numbers of yellowlegs, ibis, swallows and such, and is easily tacked onto a trip to the Villas WMA or Cape May County airport.]
Posted by Don Freiday at 1:05 PM